Our longest running show returns May 15th and @der

It’s Wednesday! So that means @sharkconnor is s

Join us this Thursday to see our new show. This w

There has been a problem with your Instagram Feed. 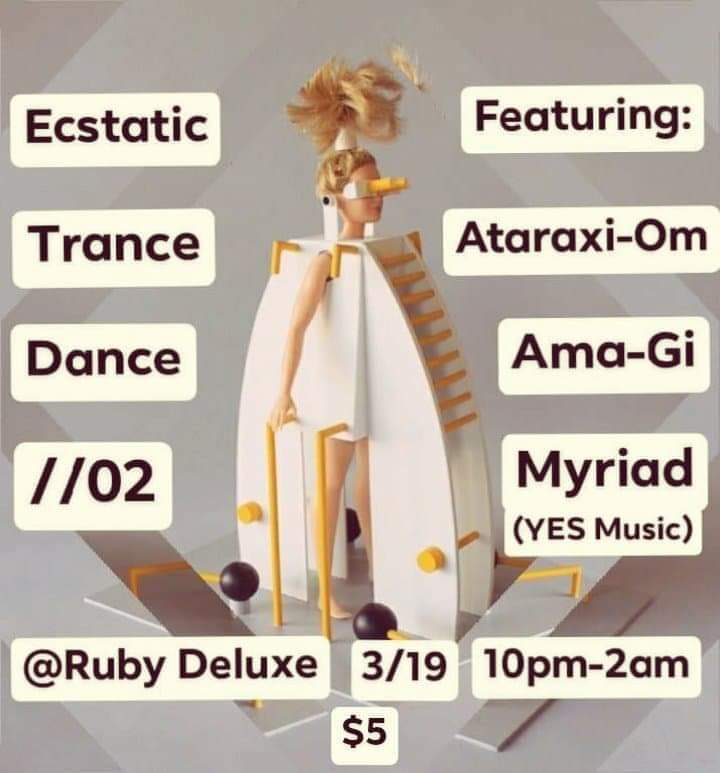 Formerly Primitive Tools, Atar-Axi-Om (James L.) is a DJ and producer from North Carolina. Ataraxia is the stoic state of peace or perfect rationality, and things that are axiomatic are self evident. Ataraxi-Om fuses these concepts in name to symbolize a self-evident state of peace through sound and vibration.
Father of Burning Down the Triad and member of Source Code Studios, he has spent most of his 20s helping spearhead the Psychedelic music scene in the Triad and triangle area of NC. He has played many events such as the Full Moon Gatherings, Pangea, EVOLVE Triangle, as well as events of his own design. Ataraxi-Om delivers a journey into textured environments of sound. Ranging from dark and tech-y to melodic and lofty, he focuses on creating a diversity of style rather than focusing on a singular groove or idea as he wants the listener to evolve emotionally on a journey through dance and sound. He is known primarily for his hi-tech and full-on/twilight sound (at later hours) and his occasional dark prog/psytechno vibrations (for the lighter times).

Ama-Gi started as just a kid with an obsession with music. Starting with drums and guitar. Ama-Gi was forged in metal, but transformed by psychedelic music. Like a mad scientist had to learn more and experiment with sound after discovering in a life changing moment Shpongle. Eventually, G.M.S. , Infected Mushroom (older stuff), Astral Projection and many others led Ama-Gi deeper into psychedelic music. Ama-Gi’s decent into the underground and ascension to the art of DJing started in a way no one believed in at first. Going from samplers with a good ear, to being lucky enough to try other DJ methods Ama-gi has learned to DJ and work with the dance floor. Now with a drive to help people dance and lose themselves to the music, Ama-Gi comes forth from the shadows to play and dance. Now it’s time for Ama-Gi to show what they can do.

Myriad is a name chosen for its very meaning.
NOUN:.. A very great or indefinitely great number of persons or things.

Dabbling in multiple genres and using different names for each one,
Myriad has blasted onto the path of the psychedelic.
After 18 yrs in this electronic existence, Myriad has embarked on his psychedelic music journey,
wiggling his way in and out of the multiple facets that is psychedelic music.
While blending beats with experience, precision, and grace he leaves no stone unturned and
you can be sure to be taken on a journey through time and space.
At any given moment you will be propelled into a dimension that only Myriad is familiar.
A dimension of multi-faceted sounds, crazy beats that drone you into a catatonic dream-like state
controlled by a multi-versed beat selector whose very name brings about curiosity and wonder.
The drums will sound and the mind will race, will you be able to handle the embrace?
_________________________________________